How To Start Building

Some of the Tools- Equipment needs To build a Plastic Model Kit.

To Build a Plastic Model Kits.

The Plastic Model Kit I am using in this Demo, is a Airplane.

I Have my kit.

About my Plastic Model Kit.

The Douglas TBD Devastator was an American torpedo bomber of the United States Navy, ordered in 1934, it first flew in 1935 and entered service in 1937. At that point, it was the most advanced aircraft flying for the Navy and possibly for any navy in the world. However, the fast pace of aircraft development quickly caught up with it, and by the time of the Japanese attack on Pearl Harbor the TBD was already outdated.

What is in your box is above no Paints or Glue.

On your piece of paper in the box it has assembly Instruction.

Study drawings and practice assembly before cementing parts  together.

Carefully scrape plating and paint from cementing surfaces. All parts are numbered.

To apply decals cut sheet as required, dip in warm water for a few seconds, slide off backing into position shown. Use in conjunction with box artwork.

Not appropriate for children under 36 months of age, Due to the presence of small detachable parts.

I hope you enjoyed this little demo on How To Start Building A Plastic Model Kits.

Need more Help write me a comment and I will get back to you as soon as I can.

Have a Great Day.

We stock a large range of Tamiya Paints Colours.

Each colour is formulated to provide the authentic tone to 1/32 and 1/48 scale model aircraft.

Now, the subtle shades can be easily obtained on your models by simple spraying.

Each Can contains 100ml of synthetic lacquer paint.

Payment can be made over the phone or by Pay Pal.

Have a great Day.

One of the most famous aircraft from WW1 than the Sopwith Camel.

This is a easy build, for a WW1 fighter Plane

The Camel was produced in a number of versions.

The Camel F.1  is the version that most people are thinking of when they think “Camel”.  This was the land-based aircraft, carrying two Vickers machine guns in the fuselage “hump”.

It was easily the most successful British-made fighter of the war, with over 1,290 kills credited to the type.

5,490 Camels were built, with some serving in Belgian and American Expeditionary Forces

The single, most-remembered engagement from the Camel’s logbook was when Canadian Captain Roy Brown encountered and attacked German ace Manfred von Richthofen. The Camel was retired from service shortly after the end of the war.

This is a plastic model kit, which comes unassembled and unpainted. So glue, model paints and other basic modelling tools are additionally required to build this kit.

History: Of Camel Fighter.
The introduction of the new Sopwith Camel fighter in 1917 was a famous event in the history of the Royal Flying Corps – it fast became the R.F.C.’s principal fighting plane and gained glory as the mount of many of Britain’s warriors of the air.

It was a plane to be respected by its own pilots, and by the enemy’s.

But the Camel was very demanding in flight, and especially take off and landing, and while other planes also had their difficulties, in the Camel these stages of flight were risky operations.
This was a natural consequence of the fighter’s design features – critically small dimensions, a rather high undercarriage and a narrow distance between the wheels; and notably the considerable moving mass of the rotary engine.

For skilled pilots who had survived the severe flying school of the Western Front all of this did not represent a vital issue, but in 1917 the Royal Flying Corps dramatically increased in size and its fighting units received many more beginner pilots.

During only one half year more than a hundred accidents occurred involving Sopwith Camels, and thirty pilots were lost.

Beginners started to be afraid of the plane and gave it the derogatory nickname Swine – in other words, “ugly as a pig”. In an attempt to tackle the situation, frontline squadron pilots tried converting the odd machine into two seat trainers, but these homemade products turned out to be too unstable in flight due to lack of attention to center of gravity issues.
At the beginning of 1918, Sopwith Aviation paid attention to this urgent problem and made the necessary changes to the Camel design, developing it into a proper two seat training aircraft. The armament was removed, the fuel tank was greatly reduced, because training flights did not last more than 10-15 minutes; a forward cockpit was inserted several inches further forward and the rear cockpit was tightly closed up to it (yes, room for the pilot’s legs in the rear seat were somewhat restricted).

These innovations allowed the two seater to maintain stability in the air without undue risk of a fatal spin or of stalling. Certainly, the two seat Camel equipped with dual controls allowed the instructor to duplicate the actions of the pupil and supervise the flight.
The plane never received its own name – it was simply called the Camel Trainer. Having built a quantity of these two seat machines, useful numbers were then delivered to the training schools and other instructional centers.

In the history of the Great War this small twin seat plane might have gone almost unnoticed, but it accomplished an important and noble mission – it achieved trust and respect for the Allies’ best fighter, the fine and unsurpassed Sopwith Camel. 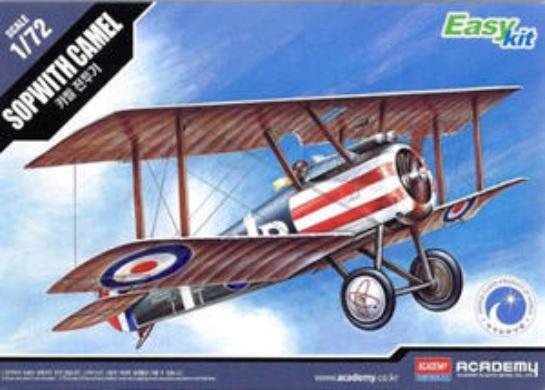